How the Death of Justice Scalia Could Impact the Bar Exam 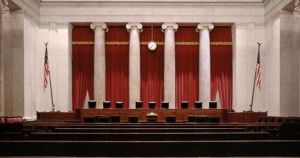 While the passing of Justice Antonin Scalia on Saturday has enormous implications and impact on the political and legal  worlds, it may also have an impact on the Bar Exam.

A quick bit of background: A divided Supreme Court can avoid highly controversial cases by refusing to hear them or remanding to a lower court. This has the practical effect of stalling some of the major decisions that would be facing the Court such as abortion, affirmative action, union dues and challenges to the ACA. In the case of those matters already argued before the Court, it’s certainly possible that the decisions rendered by the remaining 8 Justices will result in a 4-4 verdict. This has the practical impact of upholding the lower court ruling without setting a national precedent. If, as seems possible right now, there is a protracted delay in filling Justice Scalia’s seat on the Court, it is possible, even likely, that this term and the next might proceed with only 8 Justices.

Each of those scenarios create a potential impact for the bar exam. Typically, examiners draft their questions for both essays and the Multistate Bar Exam (MBE) 6 months to a year in advance of their use. When a case is before the Supreme Court, that topic is generally held out of the upcoming exam so that the law may be settled before it is tested and used on the bar exam.

With so much uncertainty over not only the outcome but the timing of the outcome, the effect will be to push certain topics out of the bar for a prolonged period of time. I think we will see far fewer essays in Federal Constitutional Law and Criminal Procedure and an emphasis on only those well settled questions of law for the MBE.

The longer the delay on these major decisions, the less likelihood of testing the principles behind the cases, like equal protection, due process, the Establishment Clause and so on. For those cases that end up in a virtual no-decision, the impact on the bar exam will be to keep that rule as it is interpreted by various lower courts and thus, make that kind of problem fundamentally unavailable for use in a national bar exam like the MBE or the Uniform Bar Exam (now being used in over 20 states including NY and the District of Columbia).

While the national implications of the death of a sitting Supreme Court Justice are significant it bears watching to see how various bar examiners decide to select questions and topics for their exams in the interim.

If you’d like to know more about how to study for the bar exam we invite you to attend our FREE Master Class: “How to Make the NEXT Bar Exam Your LAST Bar Exam.” Just click on the button below to reserve your seat.
Claim My FREE Webinar Seat