I want to share a children’s story with you. It’s one that I’m pretty sure was read to me as a child, and I know I read it to our children. It comes from a book published back in the 1950s by Kathryn B. Jackson. The book is called “Sly Little Bear and Other Bears”. It’s a classic and actually has 3 separate stories but for this post I want to use the story “Hasty Little Bear”, although I’m going to call it “Hasty Bar Students”, because the truth in the story really does apply. It’s a great opportunity to see into the way that behavior affects your bar studies. If you will permit me to paraphrase a part of “Hasty Little Bear”, and then I’m going to tell you how it actually, in my view, applies to bar students… or you can listen to the story in the link below…

The Story of Hasty Bear 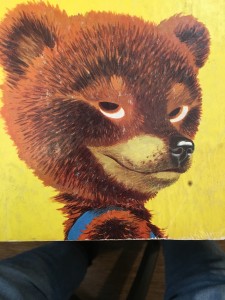 “Hasty Bear,” his mother said one day, “would you please hurry out and pick some colored, pretty leaves for me?” “Yes, ma’am. I will,” said Hasty Bear. Off he went in such a hurry that he never heard his mother saying, “Only don’t pick the shiny, red, three-leaved kind with berries.” By the time she was saying, “Because they’re poison ivy and they make you itch,” he was well into the woods looking for the brightest leaves he could find. Sycamore leaves were a beautiful yellow, and he thought they’d be nice until he saw how red and bright the maple leaves were. He thought, well, I’ll just get a big bunch of those. Then he saw some still redder leaves, shiny ones, three together on a stem with beautiful berries. He picked and picked until he had a most enormous red bunch, and he started back home. Halfway home, Hasty Bear rubbed his nose and it began to itch. His paws felt itchy, too, and so did his toes and the edges of his ears.

By the time the little bear got home, he held the leaves out to his mother, he was itching all over. Are you feeling a little scratchy, yourselves? What was worse, his mother backed away from the leaves. “Oh, Hasty Bear,” she cried. “After all I said, you picked poison ivy leaves.” “Have I?” Said Hasty Bear. “I said don’t pick the shiny, three-leaved kind with berries, because they’re poison ivy and make you itch,” said his mother. “Now let me scrub you and put the lotion on you for the itching.” “Oh, yes,” said Hasty Bear, dropping leaves in one spot, clothes in another. “Please do.” (I’ll spare you the picture of the naked bear.) Pretty soon Hasty Bear was much more comfortable, itching just a little and all dressed in clean clothes. “I’ll get you some maple leaves,” he said. “Fine,” said his mother, who was busily sweeping the poison ivy ones out the door. “Maple leaves are lovely.” This time, before he went running out, Hasty Bear waited for a whole minute to be sure he had heard everything his mother had to say.

Are You One of the Hasty Bar Students?

Hopefully the moral of the story comes out pretty clearly. One of the things that happens to bar takers in this process, as they start to get into studying actively, within typically a 90-day window for the exam, is that they become hasty. They become so preoccupied with results that they don’t listen to all the instructions. They don’t follow process. I tend to see this a lot, particularly with practicing attorneys who are getting ready, and trying to run their practice, and take care of their families, and take care of business, and everything else. The result is that they tend to jump around. I get phone calls from students who just enrolled who just jump right in, like Hasty Bear, and they don’t follow the syllabus. They don’t follow the steps involved in the learning.

You might say, “Well, what’s wrong with that? Why can’t I just jump in? Why can’t I just get to the things I want to get to?” The answer is that a good course has some pedagogy behind it, it has some design behind it. In our course, the design is built on the idea of stepped repetition, that you will take a step, and then move up a little, and repeat a little, and then take another step, and repeat a little again. In order to make that system work, you have to go through these stepped repetitions. In addition, a course like ours will be very specific about how long each assignment should take. Very often, I’ll hear students say, “Well, it took me five or six or seven hours to do a reading that you said should be three hours, but I didn’t understand the subject well enough so I spent more time with it.”

On its face, that sounds like a really good decision, but it’s a really bad decision because of the design of the course, designed to go back through and work through in repetition, and give you time to get through all of those subjects. What happens is that in the haste to get started, to jump in and just make it all happen, this flurry of activity, we get people who don’t pay attention to the rules. What happens to them? Just like Hasty Bear, there’s usually some painful effect, some itching, because suddenly they realize they don’t know how to do the writing, or they’re multi-state performance isn’t as good as it should be, or they’re frustrated because they can’t figure out how to organize the reading and the lectures and the question practice, even though all that information is provided for them. They end up having to go back and redo that material, or go back through those assignments again.

Perhaps you’re one of those people. Although, two sentences into this post, the Hasty Bears among us probably left when I said I was going to share the contents of a children’s book. If you’re with me this far, the point I really want to emphasize to you is the critical nature of following directions, of believing in process. Even if you’re not in our course, you should follow the process that’s been set forth for you in the study materials that you have. That process, no matter whose it is, is going to be better than what you just randomly came up with in chaos and frustration and panic and fear. You want to follow it. If you’re in our course, I can tell you that process is what allows us to get our students to the finish line with good results consistently, year after year, exam after exam.

And…If you’re not sure about the process to follow for your study, join us for the FREE Master Class, How to Make the NEXT Bar Exam Your Last Bar Exam. Just click on the button below to grab your seat.

When people don’t follow that process, inevitably what happens, like Hasty Bear, they end up being very uncomfortable, making their mentors uncomfortable, making their course of study uncomfortable, but more importantly they waste their time. In an effort to be doing the right thing, to show so much energy and so much activity, just like Hasty Bear, they forget to pay attention to the directions. If you’re in our course, the warning I would give you is to pay attention to your study guide and syllabus, or, if you’ve got a question, to contact us and let us direct you properly. If you’re not in our course, check with your bar review provider and make sure that you’re doing what they want you to do. Don’t just flail around wildly and with fear and frightened. It doesn’t get you very much.At the end of the day, you end up having to go back and do that work again. If you’d like to know more about how to study for the bar exam, click the button below for our free eBook, “How to Study for the Bar Exam.”