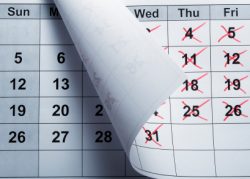 We’re currently doing a podcast series about some shifts to take as you think about study for the bar exam. The concept of study shifts is really suggested by a book called “Shift” by Peter Arnell, in which he talks about making some fairly significant changes in the way you do things in your life, in order to get different results. In this post, I want to talk about a shift that may be a bit surprising: It’s a shift about thinking, with respect to when you should start study for the bar exam.

Let me first describe what the basic premise is around when to start studying for the bar exam. Most people take their exam, whether it’s the first time, or multiple exams over a period of time, with the notion of coming out of law school, typically at the end of a third or fourth year of school, and doing nothing but studying for the bar, for an intense period of six or seven weeks. That is the presumed norm and what most people think they’re going to do. Now, nationally for about 40 to 50 percent of the people that do that, they will pass the bar. That’s the national pass rate on the bar exam. But that means that there’s an awful lot of people for whom that norm doesn’t work very well.

Now, if you’re going to an ABA-approved, top 50 law school, and you’re in the top half of the class, and you’re a prodigious studier, and you’ve paid attention all the way through law school, and you’re not going to do anything after you graduate from law school except study for the bar for six or seven weeks, a traditional bar review course in that time frame will probably work for you. You’ve got a better than average chance of passing, but that’s a relatively small number of people that we’re talking about there.

I used to say that based on experience. Now we see it  empirically. Nationally, you’re probably experiencing a less than 25% chance of passing if you’re in one of those “at-risk” categories.  Now, that doesn’t mean you won’t pass or you can’t pass, but here’s the shift you have to make. You must begin your studies NOW.

Too often, what occurs is that we start thinking that because the big box bar reviews say to wait until 6-7 weeks before the test to study that must be the best practice. Unfortunately, it’s just the opposite.

Let me give you some insight into why that six or seven week period exists.

This is the way the thought process goes (I can say this confidently, having run one of the big bar exams for several years):
A large bar review company has a huge expense in putting on their bar review courses. Typically, they try to do them in some combination of live lecture, although that’s less and less these days. Essentially, what they want to do is get as many bodies into seats for a relatively short period of time. Now, some of the bar review companies pay inflated premiums to law schools for the use of rooms in the off season. Some of them pay over-inflated prices to professors at certain schools, to get them to come in and read scripts for them as a marketing tool to have a foot into a particular school.

In both of those situations, what’s happening is that the bar review company is essentially saying, “We want to maximize our revenue, and minimize our outgo, by having a relatively short period of time in which we’re conducting the courses.” As a result, the historical tradition was, that you would take six or seven weeks, put everybody in, crowd them in as tightly as possible, bring as many lecturers in as quickly as possible, and get through the course in that short time frame. Now, that makes for a wonderful business model, if you think about it. If you can put a lot of people in, you’re certainly paying the same amount for the room, whether there’s 10 people in the room or 100 people in the room. You’re paying the same amount for the professor, whether they’re 10 people listening or 100 listening.

The economics makes sense for the large bar reviews, then, to push everything into that one short time frame, before the February exam and before the July exam. The problem is, that it’s really bad pedagogy. You see, virtually no one who’s involved with teaching, would tell you that the best way to learn, is to cram or study for 12 to 14 hours a day non-stop for six or seven weeks, trying to push it all into your brain and then, somehow, in a burst of adrenaline over two or three days, you spit all that back out on the exam. The reality of the numbers prove that out.

Most people that go through a traditional big-box bar review course don’t pass for this simple reason. In fact, if you look at a jurisdiction like California or New York that has a low pass rate, (in the 30 percentile range), you’ll really see how fouled up that approach is.

A Better Approach to Study

What’s the better approach… what’s the shift? Many years ago, one of the things that I realized was that people learn much better if they took small incremental steps in learning new material. This is called spaced repetition or the “stair step approach”. The idea is to learn a little bit, wait for a few days, go to the next step and repeat plus add some new material, wait a few more days then repeat, add new material and go to the next step, then to the next step, and then to the next step. To do that requires time. This is an incremental approach and it consistently returns better results for learners and test takers. Instead of trying to study for 12 hours a day, you study for one or two hours a day, maybe four or five days a weeks, but over a period of four or five months.

Now, some of you are undoubtedly saying to yourself, “Well, I don’t have four or five months to study.” If you have to take an exam, and you’re now in something like three months or less until the test, you don’t have much choice. You’re going to have to simply knuckle down and do it. I think home study gives you tremendous advantages here, because you can tailor that study to the times of the day that you’re available, and not the times that the course is being offered, when you sit in a room and watch a DVD, or listen to an audio. More importantly I think, the shift is that you need to think about how do you pass the bar exam? How do you study most effectively?

In my experience, the best way to do that is to start four to six months before the test. Using a study guide, a plan, like we prepare for our students, you work incrementally in, essentially 10 hours to 15 hours a week of study for that period of time. Now, you’ll make a little bump in study time when you get into the last 30, maybe 45 days before the test, that’s only normal, and I don’t think you should feel bad about that at all. If you’ve been ramping up slowly, at 10 to 15 hours a week, that’s pretty manageable. In fact, what really happens from a teaching and learning standpoint is that you consolidate the gains you’ve made up to that point.

The things that you learned early on in a course like ours, you build on, you repeat them again, you learn them again, you’re reinforced on the principles again. In addition, because we know that memorization is not the skill that’s being tested on the bar exam, we’re not trying to have you retain that information (in a memory sense), for a long period of time. Instead, we’re focused on teaching you how to use the information, rather than memorize it.

To accomplish that goal, the shift to think about today is how long do you intend to study. Most people underestimate the time it will take them to study. In our experience, in the states that we prepare students for, you’re going to need, on average, 250 to 300 hours if you’re an “average” student. Now, if you’re in one of those “at-risk” categories that I was talking about earlier, or if English is not your first language, or if you went to a less-than-stellar law school. …well, there’s nothing wrong with that. That’s not a knock on you or your school. It’s just the reality that if you’re in one of those situations, you need to give yourself more time.

I think if you ask anyone who’s actually taken the exam and studied for it, both in the traditional six week approach, and in an approach like ours that’s over a longer period of time, almost without exception, people will tell you that it’s better to study in small pieces, over a longer period of time. Most people can handle 10 to 15, maybe even 20 hours a week, on top of their work, or their practice, or their other family and life commitments. But if you have to study over 20 hours a week, you are essentially studying full time, so that’s the trade-off that you’ll need to make.

If you try to wait until those last six or seven weeks, and then take the traditional bar review course, frankly, the only one you’re benefiting is the bar review provider. You’re not doing yourself much of a favor. So the big shift that you’ll want to consider is starting early. Give yourself more time and in return a better chance at passing by starting earlier. That’s a shift worth considering isn’t it?

If you want to know more about our approach to shifting the bar exam, click on the button below to join me for a FREE Master Class: “How to Make the NEXT Bar Exam Your LAST Bar Exam: The 4 Powerful Steps Guaranteed to Pass the Bar!”